A viewfinder for elopement videography is a definition for a device designed to aim at an object, it is located above the screen (if there is a screen, of course) and it happens:

optical, when you look at an image formed by a lens or a special window, approximately in the form in which it should turn out as a result, with focusing points and other excesses applied to the focusing screen
pseudo-optical, when you look at the image formed by the camera’s matrix and displayed on the mini-matrix of the viewfinder – usually it is worse, but on a bright day the screen will show the picture much worse
In rangefinders, the optical viewfinder shows the image through a special window and is located just above the optical axis, which is why the image from it is slightly shifted up (parallax effect), 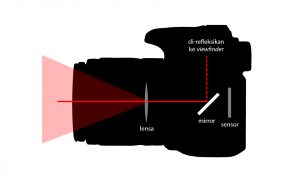 which is why, if you shoot close enough to a person, you can easily cut off his head on the frame. This is not the case in DSLRs, since the image is reflected from the mirror, and then turned upside down (or rather, head) in a pentaprism or its more budgetary variety, a system of 3 mirrors located as its working walls – a pentamirror. A prism is always lighter than a mirror, but more expensive. The larger the size of the matrix on which the DSLR shoots, the visually larger the viewfinder (for comparison, look into the viewfinder of the film “Zenith” or “Kyiv” and your budget DSLR, although it’s not just the size of the matrix) – its absolute size is defined by the term “magnification ” (“magnification”), which constantly tends to one (i.e. 0.7 is worse than 0.74 and even worse than 0.8, but 0.9 is better, etc.). In good SLR cameras, you can also see a lot of superfluous things in the viewfinder (mirror drive and dust on the side) – this means that the device can not be held close to the face, and you can see the entire frame from a certain distance, which is determined by the “eyepoint” parameter (“eyepoint ”), critical only for bespectacled people, since you don’t want to cling to the viewfinder with glasses.

The focusing screen is a special frosted glass under a pentaprism, with small squares or semicircles in the center, which are used for manual focusing. They come in different qualities, in budget models they are non-replaceable, but for expensive ones you can choose them to your liking.