Have you ever wondered why so many people take pictures, edit, draw, share pictures? No, it is easy to understand why far from the majority of amateur photographers become photographers – it is much more difficult to get to the bottom of the reasons for such a mass interest in the fine arts. In principle, everyone has 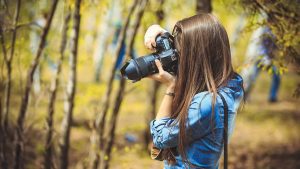 their own reasons, but there is one that is probably inherent in everyone, at least partially – we are all under the influence of stress every day, it has long since become a normal part of city life: we stepped on the foot in the subway, the boss broke, splashed cars, you were stoned, your wife yelled at you, you got poisoned in a restaurant… or all of them together and in one day can cause irritation in a person, a bunch of negative emotions, or even lead to a nervous breakdown. All these are quite ordinary reactions of the psyche, which protect it from the accumulation of negative things inside. It looks trite like this: they stepped on your foot – you stepped in response, replaced the negative reaction with a positive response in your soul and went on, happy.

With the complication of the psyche, the pressure of social norms, the appearance of additional circuits in the thought process, it becomes much more fun. For example, they stepped on your foot, you swore to yourself because your uncle was big or a woman stepped on (it’s indecent to answer a lady), you came to work in a bad mood, the day didn’t go well, because of a negative attitude towards customers, which added a negative effect … to As a result, he came home, on the way pushing those who were traveling with you in the car, quarreling with a neighbor and lashing out at his wife, saying that she cooks badly. As a result, everyone feels bad, because the conflict is now stuck in the family and will return to you more than once.

Such constant tension gradually accumulates, creating the prerequisites for not only mental illness (they say that all illnesses come from the head) and from time to time requires an annual rest for 28 days – the norm is also not drawn from the ceiling, psychologists came up with this, during this time he manages to relax not only the body, but also the mind, moreover, there is a strong desire to return to the workplace and take up the old one with renewed vigor.

But after all, by and large, a vacation is not the only way to deal with stress – in general, a vacation is complete when it represents a change in the type of activity. That is why many people go to fitness clubs, sitting at the computer all day and not lifting anything heavier than a pen all day, that is why we come off in computer games or a cinema, getting additional experiences. In fact, all this is a way to break away from the routine, switch, get distracted, give vent to positive emotions. In psychology, there is even a special concept for all this, sublimation. If you don’t describe in detail, the mechanism will turn out to be very strange: you stepped on the same foot in the morning, and you came home, put on the light in the bathroom and started removing the drops, then printed them, hung them on the wall and began to feed on other people’s positive emotions.